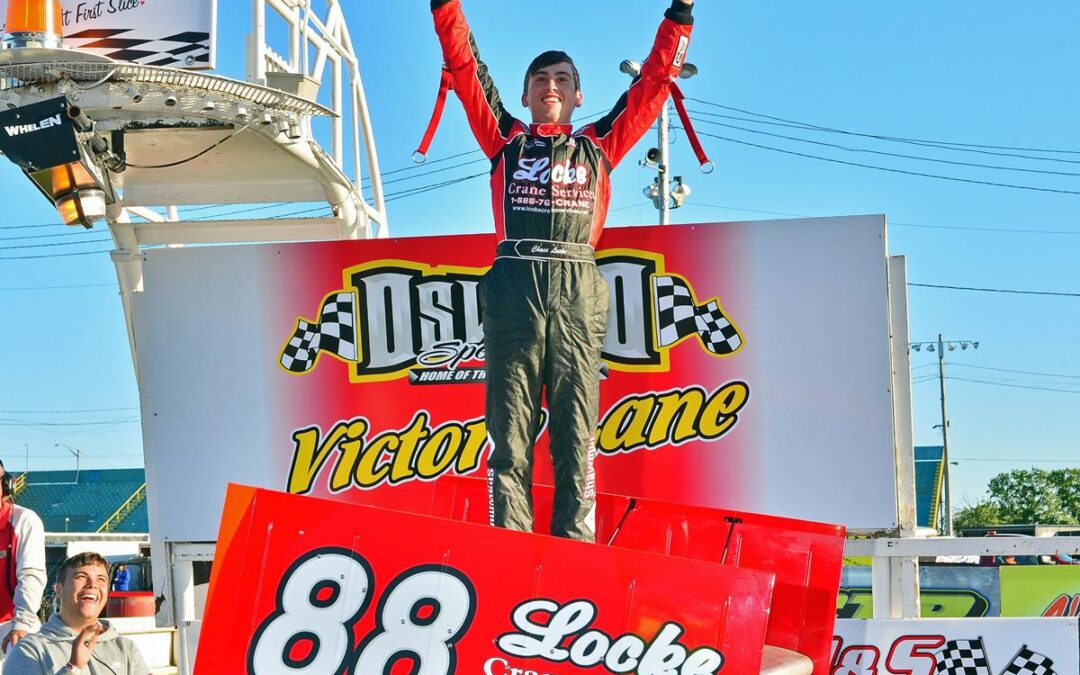 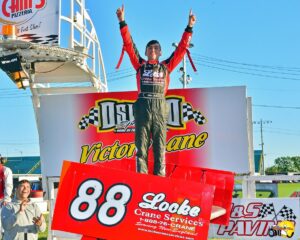 OSWEGO, NY (June 18, 2022) – After a total of five second place finishes in the 350 Supermodified division, including back to back runner up efforts to begin the 2022 season, 16 year-old Chase Locke was finally able to bookend his first career Oswego victory in Twin 25 action last weekend.

Driving the Locke Crane Services No. 88, the second generation driver started in fourth and took the race lead from Dalton Doyle on lap 10, before running away to a dominant win and etching his name into the record books as the youngest Supermodified winner in Oswego Speedway history.

“It felt really good tonight. The crew chief did a good job this week,” Locke stated. “I want to thank my Dad, Grandpa, my brother and whole family for coming out as well as all the sponsors Chester General Store, Locke Crane Services, and Jemco Construction. All of them help out a lot and I can’t thank them enough.”

Finishing a solid second was Dave Cliff, who has shown speed all year in the Barbeau Racing No. 50, however plagued by a lot of bad luck. Saturday was the third career 350 Super podium for the Speedway veteran.

“We have been struggling with our top wing badly,” mentioned Cliff. “We broke some struts the first week and changed the setup again the second week. The car has been really inconsistent this year. This week we changed it again and went to a cage mount. We aren’t quite back to the raw speed we had in the first weeks, but the car seems to be a lot more drivable and comfortable tonight. A couple more tweaks here and there and then maybe we can keep up with Chase (Locke). It was a great win for him and long overdue. The string of podiums he has had is just crazy. Congratulations to them.”

Last season’s Rookie of the Year Kyle Perry wound up in third, taking advantage of late race issues for Doyle to inherit the third top three finish of his young 350 Supermodified career, and put pressure on Cliff for the runner-up spot in the closing laps.

“I got a run on Dave (Cliff), and could get next to him, but he just had so much momentum up on the outside that I couldn’t quite clear him,” Perry said. “It was a good run though and thanks to Dave for running me clean. That was fun. We just have to make some changes to get the car handling a little bit better, but that was a start. We made some gains there and hopefully can go a little quicker in the second one.”

Cliff and Doyle brought the field to the green flag for the first 25-lap shootout with Doyle inching out in front from the high road as Cliff settled in for second, Locke now third, and Perry fourth.

Locke stalked Cliff for the number two spot in the opening laps and eventually grabbed the position with a bold outside pass in between turns three and four.
In almost no time, Locke had reeled in Doyle and was pressuring the No. 08 for the race lead.

On lap 10, Locke got a big run to the inside and took the lead going into turn three, knocking Doyle back to second with Cliff hot on his heels.

Locke was able to get out in front and run away with Doyle and Cliff left to battle for second, and it was Cliff who took away the spot from Doyle on lap 13.

This moved Perry into third, rookie Mark Schulz in the MacLeod Racing No. 32 up to fourth, and now Tyler Thompson in fifth.

Cliff had one more shot at Locke on the outside, but instead was forced to fend off the challenges of Perry, who made a bid for the two spot, but eventually fell back to third.

Locke once again checked out in the closing circuits for a dominant win ahead of Cliff, Perry, Schulz, and Thompson in the top five.

Vern LaFave, Kali Spaulding, and Doyle, filled in the top ten. Due to mechanical issues, Brian Sobus and Mike Bruce were unable to start the first feature.