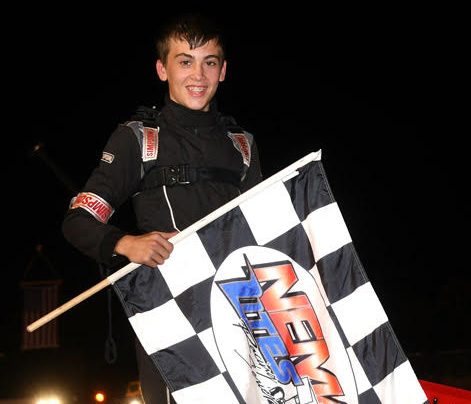 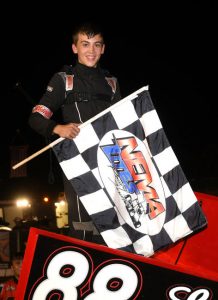 The Northeastern Midget Association rolled into the Wrenn family’s LEE USA Speedway this past Friday evening for the Freedom 300/First Responder’s September 11th tribute. Great car counts across all divisions showcased some of the best drivers in New England at the New Hampshire oval. In the NEMA Lites, after so many “so close” scenarios for the youngster Chase Locke, he finally took down his first ever NEMA Lites victory, and in convincing style. In the NEMA feature, Randy Cabral inherited the lead after teammate Todd Bertrand suffered a heart breaking flat tire with seven laps to go, as the eight time champion took down his first back to back victory in many years.

In the Lites feature, NJ’s Richie Coy blasted out into the lead from the pole position on lap one. Coy was quickly hounded by the young Chase Locke in the Chester General Store/Locke Crane Services #88. Locke followed Coy closely, and made a bid for the lead on lap nine. Once in command, Locke began to set a torrid pace, with his fastest lap of the feature coming on lap nine, a 14.182 second lap. Lap after lap, Locke began to distance himself from the field, clicking off consistent 14.3 second laps. Behind him, veterans Jim Santa Maria and PJ Stergios were engaged in a battle for the second spot, with Stergios taking over the spot on lap twenty.

As the laps wound down, Locke went unchallenged, as Stergios settled into second, and Joe Bailey in the Scrivani 21, made his way up through the field to take over the third spot on lap 25. Locke would go on to take down his first ever Lites win after heart breakers in 2019 at the Wiscassett Speedway, where he was leading and engine troubles plagued him, and a DNF at the LEE Oktoberfest after leading the majority of that feature event. Stergios would finish second, followed by Bailey, Ryan Locke, Santa Maria, Riche Coy, Anthony Marvuglio, Barry Kitteridge, Kyle Valeri and Matt Seavy.

Locke was a heat race winner earlier in the evening turning a blistering 14.0 second lap, with brother, Ryan Locke taking down the second heat race.