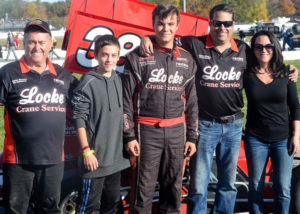 Thompson, CT – The Northeastern Midget Association rolled into the Thompson Speedway Motorsports Park for one of New England’s largest racing events of the season, the Sunoco World Series of Racing and annual Shane Hammond Memorial. Ben Seitz came out victorious after an epic nine lap side by side battle with teammate Todd Bertrand in the NEMA race, while Randy Cabral ran away and hid in the Lites portion of the event.

Each year, NEMA celebrates the life of the young Hammond, who lost his life in a NEMA Midget at Thompson in 2008. Since that point, his mother, Deb Marvuglio, has been a devout supporter of the club through the Shane Hammond Memorial Foundation, and her support of the annual event, memorializing Hammond. The racing action this year was no disappointment for the Hammond family, featuring side by side action in both events.

In the NEMA race, a tale of two races unfolded as it appeared that teammates Randy Cabral and Alby Ovitt would be battling for the win, when disaster struck Cabral’s machine taking both out. On the green flag, Cabral rocketed from his sixth starting spot into the lead by lap three. Quickly, teammate Alby Ovitt was into second and ran down Cabral by lap seven. The two were in a heated side by side battle, when Cabral’s machine lost a rear end on the front stretch, and Ovitt had nowhere to go, making contact and ending his night with a broken steering rod.

On the restart, Todd Bertrand would take the lead, with teammate Ben Seitz in second. It appeared that Bertrand would pull away, when the caution flew for Bethany Stoehr on the front stretch on lap eleven. On the restart, Seitz and Bertand drove deep into turn one, coming out even off of turn two. The two would put on a spectacular side by side battle over the remaining nine laps, with Seitz winning by a car length at the finish line. Bertrand would finish second, followed by 2019 Champion Avery Stoehr, Mike Horn, Paul Scally, Lanson Fornoro, Jeff Champagne, Danny Gamache, Bethany Stoehr, and Ovitt.

“It’s great to come back and run the midgets, they are a lot of fun,” said 4 time NEMA Champion, Seitz. “To return to victory lane in NEMA is great, I need to thank Tim and his whole team for letting me run their cars,” he said.

In the Lites feature, Shane Hammond’s brother, Anthony Marvuglio, in the Cabral 36, would blast into the lead on lap two in what would set up a Cinderella story for the Hammond and Cabral families. Marvuglio, looking strong, would lead until lap seven, when behind him, Cabral in the FMR #76 would break free of traffic and run down Marvuglio.

Cabral, Hammond’s best friend, would run side by side in a great duel with Marvuglio, with Cabral coming out on top.

Once in command, Cabral would distance himself from the field, winning the feature by over a straightaway. Marvuglio would finish second in the 27 lap feature, for a Cabral/Marvuglio victory lane celebration. PJ Stergios put on a great run, coming from deep in the field to finish third, his second podium finish in a row. Jake Trainor would finish fourth, followed by Kyle Valeri, Ryan Locke, Richie Coy, Chris Vose, Jeff Champagne, and Danny Gamache.

“Our car started to skip toward the end, I wasn’t even sure we would finish,” said Cabral. “I think it was Shane riding with me, maybe even playing some tricks on me. Its just great to win this race for Shane and his family, and also for my car owner, Frank Manafort,” said Cabral.